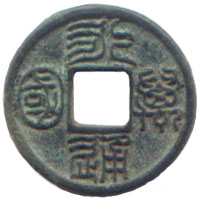 Chinas monetary history is long and there is at least 700 different coin legends (based on Ding). It can be a problem for the novice in Chinese numismatics to identify coins, if he or she can't read the legends. Beginners can usually identify a coin by browsing through the catalogues, but it is very time-consuming, Ding for example has 2700 types listed. The fastest way is to learn to look the characters up in a Chinese dictionary. When you know the latin transcription of the Chinese characters, you can use an index like the one in Fisher's Ding or on this site. In the index you can look the coin up alphabetically, according to the characters in the legend. But it is important to take note that there is at least two systems of transcription used in dictionaries (see conversion tables). Using a Chinese dictionary is not easy. You must first learn how to find the radicals of the Chinese characters, and how to count the number of strokes. Link to guide on how to count strokes in Chinese. Another difficulty is that many coins are written in a style of calligraphy that is very hard to read, even for Chinese. In that case you must find the coin by browsing the catalogues.

The legends on Chinese coins can consist of up to nine characters. The most common is four characters, but a few coins have been issued with no legend at all, like for example the Ding 514. When there is only one character on a round coin, it is placed on the right hand side (Schjöth 73). When there are two characters, they are usually read from right to left. One exception is the Han Xing of the Jin dynasty (Ding 559) which is read from top to bottom.
Before the Tang, legends often included weight units and numbers. Sometimes there were also place names on the coin indicating which city or state had issued it. But the characters could also have other meanings, like the above mentioned Han Xing, which means "the rising of the Han dynasty". After the Tang, the vast majority of coin legends were reign titles followed by the two characters Tong Bao

Reign titles.
In a few cases before and almost always after the Tang dynasty, coin legends included the name of the emperor. But emperors had many names, and they could be long, in the case of Nurhaci 29 characters (Wilkinson p. 109). Abbreviations were therefore obviously needed, especially for coins.

From the Shang to the Sui emperors were usually referred to by their posthumous title, Shihao, like Zhou Li Wang or Han Wu Di. It was Han Wu Di that was the first Chinese emperor who adopted a reign title, nianhao, in 110 B.C. (Wilkinson p. 182). With a few exceptions, emperors names were not part of the legend until Tang, but the very first coin with a reign title in the legend was the Han Xing of the Jin dynasty, (Peng Xinwei p.188).

(primary currency), so from the Tang onwards, there were always four characters on the obverse.
Emperor Ren Zong of the Northern Song had nine reign titles, coins were cast in 8 of them. His 4th reign title Bao Yuan was changed to Huang Song, because the character bao

in his name was the same as the one used on coins, and two baos on a coin would be unsuitable (David Ren p. 53).

In the Ming and the Qing the emperors only adopted one reign title for the whole reign, and the emperors of these two dynasties are mostly known by their reign title instead of their temple name. Emperor Wan Li was an example. His temple name was Ming Shen Zong but his reign title was Wan Li Huangdi. Wan Li was the name used on the coins (Wilkinson p. 109-110). In the Ming and the Qing, coins were no longer called Yuan Bao, since this became the name for silver ingots (Wilkinson p. 249).

Non-Chinese scripts.
China was in some periods ruled by non-Chinese people. This, however, did not generally change the appearance of the coins. They were still round with a square hole, but sometimes the legends were written in a non-Chinese script. One coin of the Western Xia dynasty had the legend written in Tangut script, and many coins of the Yuan dynasty had legends written in Mongol script. The rulers of the Qing were not Han-Chinese but of the Manzu people from the North. In general they adopted the Chinese system of administration and kept the Chinese writing on the obverse of coins, but the words on the reverse were now written in Manzu script. There is a guide about how to read the Qing Manzu legends in Fisher's Ding.

Charms and coins from Vietnam, Japan and Korea.
If you look through a hoard of Chinese bronze coins, you will often find coins that looks like Chinese coins, but after browsing some catalogues you still can't find it. Then there are two possibilities: it can be a coin from one of China's neighboring countries or a charm.

Charms are good luck coins. They often look like coins, but most often they have some ornamentations on them. Some Chinese charms were official issues, and some were private issues. For more information about charms please visit www.charm.ru where you can also sign up for a discussion group on Chinese coins and charms.