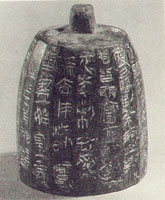 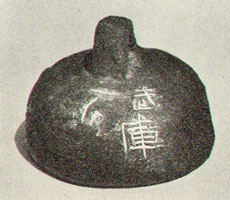 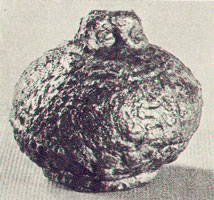 This chapter explains the different names and units used for Chinese coins.
The Wu Zhu and the Ban Liang are examples of coins named after their weight.

Most coins in old China were made of bronze. Their value depended on their weight and was always close to the intrinsic value of the metal. The first measuring unit in ancient China was called Zhu and was probably based on a number of millet grains. The larger weight units were probably based on this smaller unit  (Wang p. 207). The legends on coins were often denominations of weight like for example "1 Liang and 12 Zhu", and ideally a coin would weigh what it said on the coin (Wang p. 207). But the temptation to increase the seignorage from the minting, by reducing the weight of the coins, was a constant threat to the stability of the economy, since a debasing would invite counterfeiting (von Glahn p. 34). Officials defended full bodied coins, but in reality coins were often debased and were smaller than the intrinsic value of the metal. There were no universally fixed weights or coin standards until the Qin dynasty, when the emperor made standard weights and the Ban Liang became the standard currency.

The actual weight of the different units varied in different periods, and some of the states before the Qin used other units which are not mentioned here. For further information about weights, please refer to the chapter on weights in the index volume of Hanyu Da Cidian.

.
This word had three meanings: axe, spade coin and a weight measure. According to Wang, it was only a name for coin at first. Later, during the Han dynasty, it became a measure of weight (p. 214). We do not know for sure why the character Jin was used for money. Wang speculates that maybe one spade coin could buy one iron axe (p. 213), and in time people just said axe instead of spade when they referred to money.
In Hanyu Da Cidian (index volume, p. 17), we find descriptions of standard weights, which archaeologists have discovered from different periods.

.
The Lüe was a weight unit mentioned in the legends of early spade coins. According to Wang (p. 209), it was probably an early name for spade coins since the only other two types of coins, namely knife coins and the Yuan-Jin gold coins of the Chu state, were called Hua and Yuan respectively. Wang finds it likely to be a designation that preceded the Jin

.
Wang concludes that there were two different weights for the Lüe. He cites Guo Moru for thinking that maybe the heavy Lüe was an early Shang measure, or that there were one used for money and one used for commodities. In the legend of some early spades, the Lüe is equivalent to one Jin. (p.210).

.
The word Liang has always meant two, and originally it was used for anything of a pair. For example, the measure word for carriage was Liang because it had two wheels. As a weight unit, the Liang was a unit made up of two smaller units: Wang cites Ban Gu who stated in the Han Shu that the Liang was two times 12 Zhu (p. 222). Since we know that 1 Jin is 16 Liang, one Qin Iiang must have been approximately 17 grams, and the Han Liang approximately 15,5 grams.

.
The Zhu was replaced by the Qian

unit in 621 A.D. in the Tang dynasty. The Qian was 1/10 Liang, and was the weight measure for commodities as well as a unit for coins from the Tang dynasty onwards beginning with the Kai Yuan (Peng 247). The Tang system of weight remained unchanged until the Qing.
The Qian as a monetary unit, see below.

The Bei.
The Bei

was the name and unit for cowry shells that were used as money before the appearance of metallic money but also during the period up to the Qin dynasty. We know that peng

was the word for a string of cowries, but we don't know how many bei it consisted of.

in some books and catalogues has been mistaken for dao

, which in its early form resembles it. It was a word for coin, mainly knife coins, and was not a weight unit.

.
Quan was not a monetary unit, but a word for coin from the Zhou to the Tang, after which  it was replaced by the Qian (see below).

as a monetary unit.
Qian is in numismatic literature most often translated as cash. Qian had been a monetary unit since the Han, but most coins were named after their weight like the Ban Liang and the Wu Zhu. From the Tang dynasty onwards Qian became a unit of weight and the Tang system of weight has remained unchanged until the Qing. In fact, Qian has remained to be the monetary unit to this day (Peng p. 247).

.
From the Jin to the Tang the Wen was the monetary unit. It was used in the same way as the Qian is used today.

as monetary units.
Both Jin and Yin means axe and were monetary units for spades. The Jin was initially, before the Han, a monetary unit, and later it became a unit of weight. See above. (Note that Yin

.
Yuan is used as a name for the gold Yuan Jin coins of the Chu state.

.
These were all words for a string of coins that were a specific unit of money. Originally, a string consisted of 1000 coins, but it varied in different periods. In 977 the Song government established an official short string of 770 coins, in later periods it varied from 800 to 990. A short string of 100 coins was often used for smaller market transactions (von Glahn p. 22).
Guan, Suo and Min were the names for coin strings before the Song. Diao and Chuan were names used in the Ming and the Qing (Wilkinson p. 249). Paper money had the value of one string of coins, and Guan was also the monetary unit for papermoney up until the end of the Song.