In early times, bronze spades had most likely been used as exchange mediums. The spade coins were imitations of the real spades that were easier to carry. There has been discovered several tools of this type. Wang describes two types (p. 90-92), and compares them to the spade coins: the tools had a hollow handle with a hole, where the shaft was secured with a strap. To make the spade stronger, the socket projected onto the blade and it had protruded reinforcement lines on the blades. The early types looked more like the real tool, than the later ones. In time the spade coins became lighter, thinner and increasingly stylized. The handle was no longer hollow and the slight concave shape of the sharp end of the blade became deeper, so the spade coins got the resemblance of a human.
According to Wang there were two names for the spade coins: Bu

. Bu has always meant cloth and never been known to be the name of a tool. Wang gives the complex, but plausible explanation, that bu and bo

could be used interchangeably, and that in later times the tool and coin was only known as the Bu. The other name Qian has also been used for the spade money in the historical literature. Wang says that Qian was another type of spade, and that each of them was imitated for a type of coin (p. 97-98). Since the coins did no longer look like the tools, there has been a need to have specific names for tools and for coins, so the name for the tool spades became Bo and Tao and the names for the spade coins became Bu and Qian. Later the Bu became the designation for spade coins. When the round coins came into use, Qian became the name for money in general, which it actually still is today. The monetary unit for the Bu spades were the jin

, which also meant axe. Axes had also been exchange objects like spades and knives. Another unit used for the spade coins were the liang

.
The earliest evidence of true coinage were, according to Wang (p. 106), an ode in the early text Shiji. This text was from the Western Zhou

and written no later than the 7th. century B.C. This means we can date the spade coins at least this far back, but it was probably much earlier. Since there is no earlier literary sources, we must rely on archaeological evidence. Wang mentions two identical bronze inscriptions (p.109-112) with certain mention of the character bu as spades as well as cowries. Luckily there is mentioned a certain year and a queen in the inscription. Wang bases his dating of this bronze on that the first year of Zhou was 1122 B.C. From this he makes an argumentation, that leads him to believe that it was from 1110 B.C.
Wang's book is from 1951, today most regards the first year of Zhou to be 1045 B.C. If we follow Wang's argumentation, but subtract 77 years, the bronze inscription is dated 1033 B.C., the twelfth year of the Zhou dynasty, but of course it is still possible, that they were in use earlier. However, Wang warns against the danger of relying on a single piece of evidence.
Regarding the evolution of the different types of spades, I will not go into detail here, since it is a complex matter. I will just briefly mention the four main types that Wang describes (p. 116-129):

1. The prototype spade. From the end of the 12th or 11th century B.C. Had a faithful resemblance to the real spades, but was smaller. The earliest spade coins had no legend. The calligraphic style of the coin legends on the later types, are the same as on the bronzes of the period.

2. The hollow handle spade. Around 400 B.C. There were two types with hollow handle: one with pointed shoulders and feet, and another with flat shoulders and slightly curved feet (see image below). It was imitated from two different types of tools, possibly a weeder and a spade. Legends could consist of numerals, place names and mint names.

3. The old spade. 400-340 B.C. Without hollow handle, and the blade split into two square feet. This type had three denominations: two jin, one jin and a half jin. This type evolved from the hollow handle spade with flat shoulders.

4. Late spade. 340-250 B.C. (see example on the Warring States page). Four different types of late spades evolved from the original two kinds of hollow handle spades, and they were made in two sizes, a large and small. The large was 1 liang, the small was 12 zhu or ½ a liang (1 liang=24 zhu see weights). 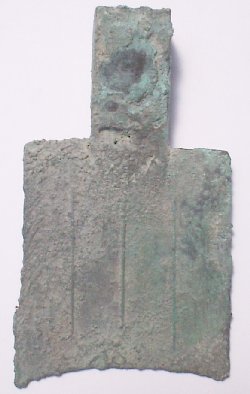