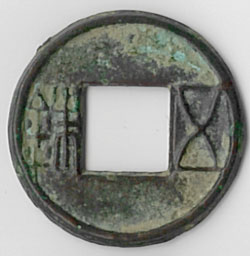 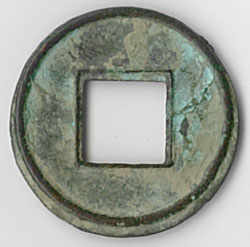 Han Wu Zhu of Emperor Wu. The two parts of the mold have not been aligned properly.

During the Han, coins were minted in the mountains. The copper was minted where it was extracted from the mines, and it was alloyed with different amounts of other metals like tin and lead, so the alloys varied from place to place. Examples of stone moulds used for direct casting, were still used in the Qin and the Han, but the casting techniques improved. The cluster moulds (see fig. 1-4) were still broken in order to release the coins, but now bronze mother moulds were employed to manufacture the child moulds. Fig. 7 is a tree-shaped mother mould for casting of Ban Liangs. The mother moulds were used to make identical impressions into the clay moulds used for the actual casting. The mother moulds had inscriptions in relief like the coin, and this made the impression in the clay mould in intaglio. Iron mother moulds was not used before after the Han (Tang p. 75).
A further development was the tree-shaped mould. This was made the same way as the cluster mould, but could be used more times, since its shape allowed the mould to be opened after the casting of coins (see fig. 6, 7 and 9). One would assume that the cluster method stopped being used after the invention of the tree mould, but as illustrated in fig. 6 and 7, both Wu Zhus and Ban Liangs were cast using the tree method, although the Ban Liang is much earlier.

In the article A Han Dynasty Coin Mold, H.F. Bowker describes a Wu Zhu coin mould that belongs to Coole's collection. He describes it as we see in fig. 1 as baked tile moulds stacked on top of each other, encased in a porous clay sheath. The sheath is applied to keep the tiles in place. Vegetable matter, which is mixed into the clay, burns and leaves pores in the clay that are necessary to let gasses escape during the casting. Bowker suggests the possibility that the mould assemblies were not baked, but only sun-dried. However, Barnard (p. 34) has an illustration showing a coin mould baking kiln from the Wang Mang period (see fig. 5) and Tang writes that the moulds were baked. Tang also writes that the mother moulds were made larger than the size of the final coin, because the moulds shrinked after the heating (p. 75).

The mould from the Coole collection probably only still exists because it cracked during baking and was discarded.